The differential transcription network between embryo and endosperm in the early developing maize seed.

Transcriptome analysis of early-developing maize (Zea mays) seed was conducted using Illumina sequencing. We mapped 11,074,508 and 11,495,788 paired-end reads from endosperm and embryo, respectively, at 9 d after pollination to define gene structure and alternative splicing events as well as transcriptional regulators of gene expression to quantify transcript abundance in both embryo and endosperm. We identified a large number of novel transcribed regions that did not fall within maize annotated regions, and many of the novel transcribed regions were tissue-specifically expressed. We found that 50.7% (8,556 of 16,878) of multiexonic genes were alternatively spliced, and some transcript isoforms were specifically expressed either in endosperm or in embryo. In addition, a total of 46 trans-splicing events, with nine intrachromosomal events and 37 interchromosomal events, were found in our data set. Many metabolic activities were specifically assigned to endosperm and embryo, such as starch biosynthesis in endosperm and lipid biosynthesis in embryo. Finally, a number of transcription factors and imprinting genes were found to be specifically expressed in embryo or endosperm. This data set will aid in understanding how embryo/endosperm development in maize is differentially regulated. 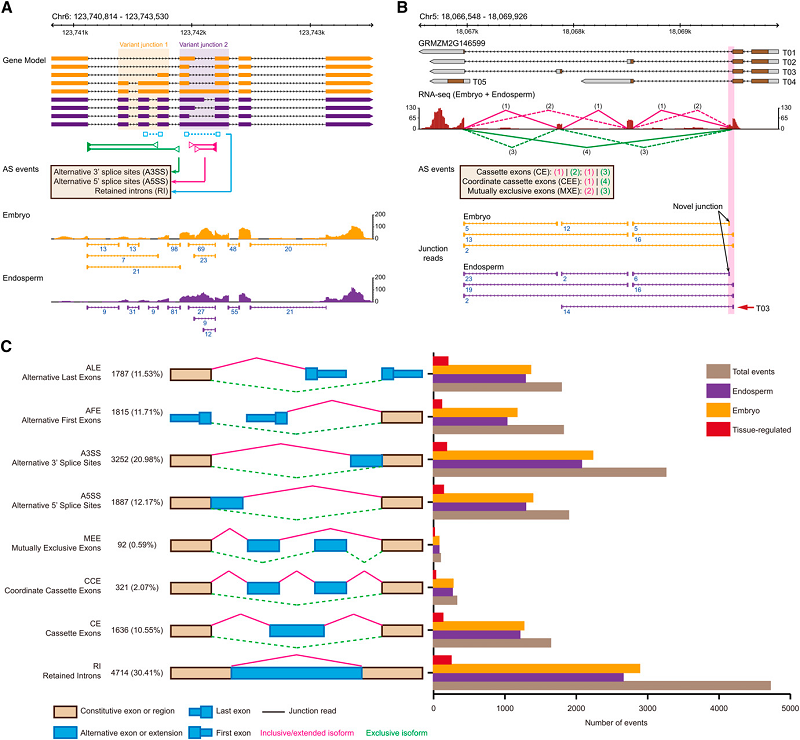